My kids are always starting businesses. They aren’t often successful businesses, but I love their effort and their indomitable spirit.

The lemonade business has been pretty good, but only when they time it right. The front-yard restaurant was surprisingly successful despite them selling only imaginary food. But the rock business! That one was horrible.

Both my kids love rocks. They don’t love rocks so much that they’d be willing to buy one, but their love for rocks is so strong that they believe other people would gladly pay 50¢ for any one of the small stones they’ve pulled from the creek behind our house.

Two winters ago, when the lemonade business wasn’t really a good option, they set up their rock stand and tried selling to passers-by. Whenever anyone would get close, Alex would shout, “Rocks for sale! Get your cool rocks here!”

Unfortunately, there wasn’t enough foot traffic for them to get any real traction, so they decided to take their game on the road. They bagged up the rocks, and started walking around the neighborhood. I tagged along.

First they tried the direct approach: They would walk up to a pedestrian and, while Rhea hid behind her brother, Alex would ask, “Would you like to buy a some rocks?” Honestly, I thought they’d have at least a little success. As it turns out, not a single person out of almost a dozen was interested. Most were polite about it and some simply looked confused and walked away.

After a few such frustrating encounters, I offered some sales coaching: “Little yeses add up to big yeses,”

Instead of asking people if they’d like to buy one of your rocks, try asking people if they like rocks. If they say yes, then you know they might be interested in buying some. That’s how you qualify your prospect. Then tell them you have some really cool rocks and ask if they’d like to see them. If they say yes to that, you know you are on to something. Offer to let them hold one. If they accept and then marvel at its wonderfulness, then you know you’ve demonstrated your value proposition. That’s when you can let them know that you’d be happy to sell them one of your treasures.

They really liked this idea, and gave it a try. Their new approach helped them to generate a lot more interest and a lot of compliments on their cool rocks. But alas, none of the rock lovers had any money on them. Alex and Rhea headed back to the house with a full bag of rocks. Along the way, they tried to give some rocks away, but their little hearts weren’t in it any more, and even at a price of zero, they couldn’t find any takers.

Fortunately, the rock business didn’t dampen their zeal, and they learned a couple lessons along the way:

They have a new venture this summer, and I think they’re going to make a go at turning it into a real going concern. Last week, a friend mentioned that he’d love to have fresh fruit delivered to his office for his team, and he wondered if I knew of a service that did that sort of thing. I immediately thought, What a great idea. I’d like to have that in our office as well.

The next day I told my kids about my friend’s problem, and mentioned that we had the same one in my office. “How,” I wondered aloud, “might we get some fresh fruit delivered to our offices!”

They both immediately jumped on the idea. “We could bring it to you!”

And thus began Rhea and Alex’s Snack Delivery Service. On Saturday, they went to the Piedmont Park Green Market to pick up a bunch of Georgia produce. 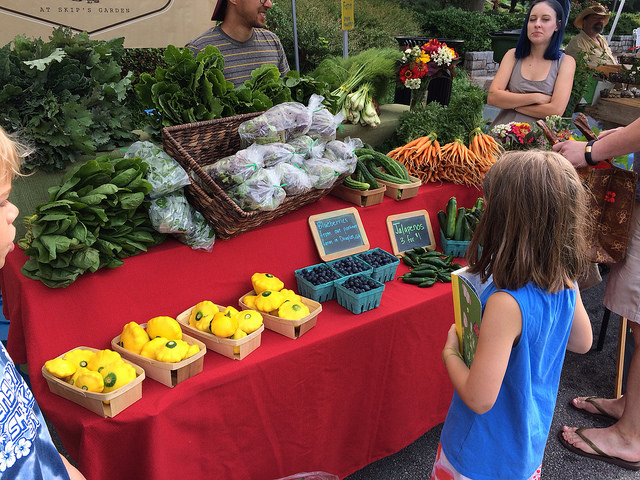 Rhea kept a tally of their expenses:

On Sunday, they wrote (and illustrated) notes for their two customers. On Monday, (with a little help) they made their first deliveries.

My daughter doesn’t normally walk up to adult strangers, stick out her hand, give a firm shake, and introduce herself in a clear voice. She’s usually a little shy and would prefer to stand quietly at her mom or dad’s side. But on Monday morning on her very first delivery, she not only confidently introduced herself to an adult stranger in a room full of adult strangers, but she went on to explain what was in their package and where their fruit came from. She then thanked her new customer for their business, and wrapped up the conversation with, “Would you like to pay by cash or credit card?”

Alex took their new customer’s card and deftly processed it via Square. They both then wished their customer well and departed with another word of thanks.

They kept it cool the whole time we were in there, and as soon as we left the building, they began bouncing with delight.

Rhea shouted, “We did it!” I asked if she was nervous. “At first,” she said, “my tummy felt funny. I didn’t want to say anything and I wanted to hide behind you. Then I decided that I wasn’t going to be shy, and the funny feeling went right away. It was easy!”

Alex reflected a moment and, drawing from his experience as a neighborhood rock salesman, observed, “It is a whole lot better to sell to people in offices. They have money in offices.”

Since Monday, they’ve doubled their number of customers. Now they’re starting to talk about expenses, logistics, marketing, and customer service. They’re also thinking about resource issues and how they can enlist and compensate friends to help on the days they are out of town. They’re doing all that while balancing their summertime frolicking obligations. It’s a big challenge for a seven and nine year old, and it will be a big effort for them to keep it going. We’ll see what happens.

P.S. Many thanks to the good people at ShootProof, for giving some young entrepreneurs a chance. Hope you enjoy the snacks.