Arguably, land use controls have a more widespread impact on the lives of ordinary Americans than any other regulation. These controls, typically imposed by localities, make housing more expensive and restrict the growth of America’s most successful metropolitan areas. These regulations have accreted over time with virtually no cost-benefit analysis. Restricting growth is often locally popular. Promoting affordability is hardly a financially attractive aim for someone who owns a home. Yet the maze of local land use controls imposes costs on outsiders, and on the American economy as a whole.

From The Brookings Institute comes an excellent description of the insidiousness of land use regulations. There’s a tremendous amount of negative that has trickled down from these regulations, and what benefit there has been accrues overwhelmingly to the large landholders and real estate development companies that either have the political clout to influence them or can sustain the overhead necessary to navigate them. 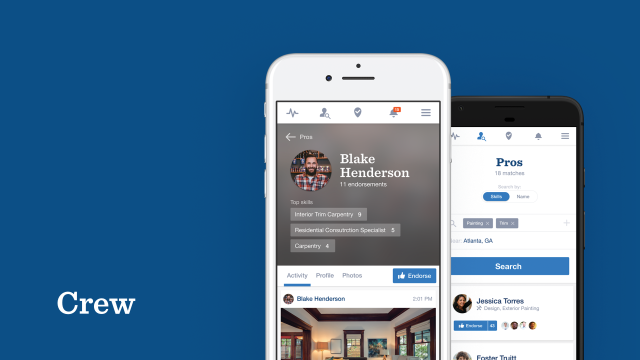 For the last year, the GuildQuality team has been building a new product called Crew. Unlike our core offering (which is for companies—specifically remodelers, homebuilders, and home improvement contractors), we’re building Crew for all the people who work in the field—skilled laborers and trades.

Our plan is to give every person working in our industry a free profile with which they can post pictures of their work, share their skills, and check in to job sites. Importantly, they can also endorse others and receive endorsements, and show up in location and skill-based searches.

While Crew is certainly a service that homeowners might be interested in, we intend to focus on serving professionals, i.e. general contractors who are always seeking talented workers and the skilled trades who are looking for work opportunities.

To give you a better idea of what Crew looks like, check out my own profile. Interested in finding a carpenter in Atlanta? Or a painter near Washington, DC? Try searching on Crew. And very soon you’ll be able to post jobs and respond to job postings.

The skilled labor challenges in our industry are painfully acute right now, and we’re working to ease that pain by shining a spotlight on the work of the best skilled laborers and trades out there. Moreover, by highlighting their great work, we can make it more obvious to ambitious young people that a rewarding career awaits them in construction.

I’ve loved watching the GuildQuality team build an entirely new product. They’ve accomplished a lot, and have a ton of great stuff in the pipeline. If you work in the building industry, sign up for Crew here and follow along with our progress.

Some members of our team (me included) were recently stuck on a decision, and that led to us getting stuck in a discussion vortex. After a couple weeks, we found ourselves scrambling to choose a path in the face of a looming deadline. We got it resolved, but that kerfuffle reminded me that there are always only four types of decisions.

From less to more involvement of team members, those decision types are:

1. Command – leader takes charge, asking no questions and just directing (mainly used in crisis);
2. Consultative – decision maker gets individual feedback from team members, then makes a decision;
3. Collaborative – team has a discussion, after which decision maker makes the call; and
4. Consensus – everyone has to agree or majority wins. This is only used for things like where to go to lunch.

90% of decisions are either #2 or #3. #1 through #3 require decision maker to be named before launching into the process.

Staying mindful of the four types is empowering for everyone who participates. When we aren’t mindful of which type of decision we’re making, frustrations can emerge. For example, people might think something is a consensus-driven decision, but others actually understand that it is really collaborative. Then people become upset because the decision maker simply made a decision without calling for a vote or without consensus being reached. But when we are mindful of the decision type, each person knows their role to play, and instead of trying to get their desired outcome, they are more apt to focus on fulfilling their role (giving thoughtful counsel).

Trust and a clear understanding of who is ultimately making the decision are big requirements for us to make good decisions and for everyone to feel good about the process. The participants need to trust the decision maker’s judgment, and also trust that the decision maker will thoughtfully consider their input.

Within a trusting team, choosing a decision maker is almost always easier than reaching agreement.

Thanks to Craig Johnson for introducing me to this idea.